Uber, the not so disrupting disruptor?

A recent HBR article by Christensen on "What Is Disruptive Innovation?" states that Uber is not "genuinely disruptive" and it doesn't fit into his hypothesis of disruptive innovation. Well, he is certainly entitled to modify it anyway he sees fit but the article does raise concerns over post event classification i.e. the original claim that the iPhone wouldn't be disruptive followed by the article's claim that it wasn't in the smartphone market and it was in the PC market. I happen to agree with the basic premises of disruptive innovation though I do note that there appears to be at least two different forms of disruption - one anticipatable and the other not. That said, let us get to the point of this post which is Uber.

First, I'd argue that a case for Uber being disruptive can be made if you look at the right thing (a bit like the above HBR article which compares the iPhone not with the smartphone market but instead the PC market). The area to examine is whether Uber is replacing the human controller. The person who you called, who co-ordinated taxis and who told you the car would be there in five minutes (it never was) has been automated out of existence. I know taxi firms who dismissed the idea of an application doing this citing that people wouldn't trust it, the benefits of talking to a person, of accounts and a more personal service. Uber however took the controller and turned them into an automated bot creating the barest minimal of interaction.

In the process this automation also expanded its reach, there are limitations on how much any human controller can effectively control. So, whilst I agree that Uber is not disrupting taxis per se, it certainly seems to be disrupting the idea of a human taxi controller by first turning this interaction into volume operations of good enough. However, what's interesting in this topic is when people talk about the potential of Uber to disrupt the automotive industry.

To understand why, we first have to look at a map of the automotive industry. I won't start with today's map but one which has been rolled forward to 2025 (see figure 1). 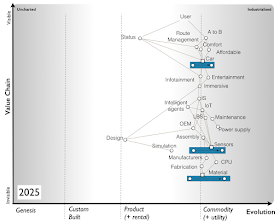 The user has two basic needs - status and getting from A to B. The latter has multiple sub needs from comfort (which includes safety and security) to affordability to route management. These are all encapsulated in the concept of the car and there is a pipeline here from the more product / differential focused automotive to the more commodity like vehicles. You can follow the chain down through systems to provide comfort (including entertainment and infotainment) to OEM to component manufacturers. To keep the map reasonable, I'm cutting down whole sections to nodes (e.g. power supply or material).

In this picture of 2025, intelligent agents have become increasingly common and hence most cars have some self driving capabilities. Cars are becoming increasingly immersive (the inside of the car is just one big set of screens, probably printed). What starts to differentiate cars is not the car itself but the design associated with the immersive experience and the connection between status and route management. By this point, cars provided on some sort of utility basis will be increasingly common. This trend of intelligent agents, immersion and design subscription will continue to diffuse. So what does this all mean?

By 2030, in all probability most of us won't own cars. When I leave a meeting then my car will certainly be there to pick me up but that same car will be the one that you were using 30 minutes beforehand. Cars, for most of us, will have become very commodity. What will distinguish our journeys will be the level of digital subscription service that we have. If you are a "platinum" service member then not only will the outside of the vehicle alter (colour, some other affects to show your status) but the immersive experience will be more tailored for you and your journey will be faster. Why? Well the cars driving us "silver" subscription members will get out of the way for your car. We won't even notice because we're inside in our immersive experience which for us "silver" members probably involves a lot more advertisements.

The cars themselves will monitor their own performance, drive to the repair shop when needed, communicate between each other and re-route constantly based upon not only the journey time but the subscription services of other car users. Of course, human driving will be increasingly outlawed except for super high end status vehicles where the illusion of human driving (safely managed by an intelligent agent) is given. There's all the usual knock on effects to car parking (we don't need as much) to repair shops to traffic signals etc.

Taxis in this world will become a thing of the past except, in a sense, most of the cars are acting like taxis with automated controllers and automated drivers. We don't own these cars, we just subscribe to our service and pay for what we use. By 2045, well the scenarios get even more outlandish. But who will own this new world of vehicles? Will it be Uber or Google or Apple or Ford or even GM?

If you look at the above map, identify the points of war (i.e. the shift from product to more commodity), the impact of technologies undergoing the same change (e.g. immersive, robotics) and then add in the structural advantages (e.g. education, financial and manufacturing scale) and strategic gameplay of companies and nations (e.g. last man standing, creation of centres of gravity, directed investment etc) then a very different picture emerges. Figure 2 provides major impacts from points of 'war' (red boxes) and overlays examples of known gameplay of significant scale in China. Even by 2025 then China should be edging ahead in the automotive industry by building, designing and operating the most advanced forms of these vehicles. Alas, even today Western companies keep on underestimating the speed, agility and entrepreneurial spirit of China. 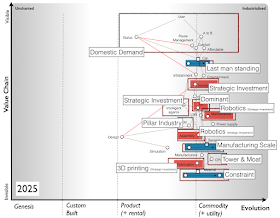 The automotive industry seems destined for an immersive, self driving and digital future provided through highly commoditised vehicles. However, I expect the beneficiaries of this change to be Chinese OEMs combined with service companies such as Baidu and Didi Kuaidi. As for Uber then I agree it is disrupting the human controller. I also agree it will have a part to play in this new world for a time. But, I don't expect Uber to be the company disrupting the automotive industry even though it might dream it will.
swardley at 2:02 am
Share
‹
›
Home
View web version