On D&D vs Ant Battles - a Question of Strategy

Recently I posted on the question of "Dungeons & Dragons vs the Art of Business Strategy" and received this wonderful riposte to the same. I do like a good joust and much of the response is perfectly reasonable.

Now, whilst I don't view D&D as a teaching tool itself, I do view it as a remarkable comparison between how a gaming environment and business operates. The premise that I proposed is that business can do better if they understand their environment, their capabilities and roles, improve their team play and prepare (i.e. scenario plan and train). 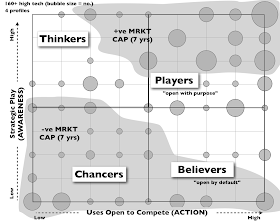 In business we often have no form of competitive maps but instead rely on what should be artefacts of scenario planning. In the worst cases those artefacts (business model canvas, SWOT, kaplan strategy maps) become the primary source of awareness and the scenario planning required to create them isn't even done. This is my primary issue and why I made the comparison between D&D because such a basic element of strategic play shouldn't be missing from business. But alas, it more often than not is.

This absence often shows itself in the 'strategy' of a business being little more than a tyranny of action (how, what and when) with operational, implementation, purchasing and tactical choices.  This is opposed to situational awareness (where and why) being dominant.

The 'why' itself can often be reduced to the copying of others on a premise of backward causality.  If A does B and A is successful then we too should do B. Hence many companies have identikit strategies covering topics like cloud, big data, social media, IoT but little awareness of why or the context they exist within. I have poked fun at this before. It is depressingly common.


Whilst I agree that strategic planning is complex especially over a considerable period of time, the basic premise of understanding your environment appears to apply regardless of time or complexity. Whether within Government or commercial settings, I have witnessed first hand the devastating effect of understanding the environment. Now, I do not propose that companies simply copy the actions of others but instead understand their environment before acting.

We often like to think that business is like a game of chess. The reality is more akin to a game of chess with competitors that rarely look at the board before moving. I'm not being disingenuous when I state that D&D groups often have far greater situational awareness over their environment than a business does over its - that often appears to be the case.  I wouldn't also compare business to military because the level of strategic play within the military far exceeds anything I've ever witnessed in business, even in the most high tech of companies.

This alone is why I often smile when I hear people ask how do we make the military more like a business? My normal response is - "Take away any maps, don't allow people to understand an environment before engaging, remove scenario planning and training, add in poor communication and replace combat strategies with a vision and some nice stories - once done, you'll be just like most business".

Now obviously, the scopes are different and business is a continuous and draining act of competition. However, it's for these very reasons that I strongly suggest we learn the basics from other competitive groups because we appear far behind them in terms of play. There are exceptions and there are companies such as Quid and Palantir that are trying to change this. But I do recommend that we should be realistic about business and not to be lulled into believing we're some bastion of strategy.

Instead, what we normally are is - an organisation with communication, management and control issues competing in an environment over which we have little to no situational awareness nor mechanisms for learning nor understanding of basic principles of change but in which we take action.

Our saving grace is our competitors are normally in the same boat. In competition it's ok to suck as long as everyone else does.