Businessmen, they drink my wine

From Chaotic to Linear

Organisations consist of value chains that are comprised of components that are evolving from genesis to more of a commodity. It sounds fairly basic stuff but it has profound effects because that journey of evolution involves changing characteristics.

For example, let’s take the genesis of an activity, the first implementation. Let us choose computer infrastructure and wind the clock back to 1943 and the Z3, the first digital computer.

By definition the activity was scarce as there was only the Z3. It was poorly understood and we were still in the process of discovering what a digital computer could do. The act was uncertain as we had little idea of what it could lead to and as such it was unpredictable and rapidly changing.

But the activity differed from what had been before and had the potential to make a difference between companies, it was a source of differential value and competitive advantage and as such it had economic value. There was however no market to speak of, customer were on as much a journey of exploration as the producers.

Today, computing infrastructure is commonplace and its purpose and use is well understood by a large number of people. We tend to focus less on what a digital computer can do but instead what we can do with vast numbers of fairly standardized units. The use of computing infrastructure is not a differential between companies and it tends to be nothing more than a cost of doing business. – you will rarely hear a CEO talk about how their company has just bought their first computer. The market is predictable; customer demands for large volumes of more economically efficient units are well understood.

A single activity has evolved from rare to commonplace, from poorly understood to well defined, from competitive advantage to cost of doing business, from rapidly changing to standardized.

This change of characteristics is common for all activities as they evolve. They shift from chaotic (rare, constantly changing, source of differential, poorly understood) to more linear (common place, standardized, cost of doing business, well understood). This progression is show in figure 7 with the example of computing infrastructure.

Figure 7 – from chaotic to linear 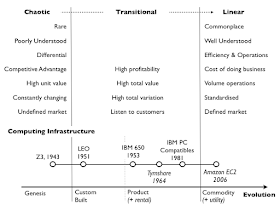 Now, a couple of areas are worth paying special attention to:-

Value
The genesis of an activity may provide a differential between companies (if it is useful) and such it will provide an economic benefit or value. As that activity evolves, the various iterations will diffuse through society until the activity becomes commonplace and its differential benefit reduces to close to zero i.e. what started with a high differential value results in almost no differential value and becomes more of a necessity, a cost of doing business.

On one hand you have declining differential value due to diffusion but on the other hand a volume increase in the number of instances of that activity. Hence whilst the unit value tends to decline as it becomes less scarce, the total value tends to increase during the transitional phase.

This is neatly summarized in Jin Chen’s an Entropy Theory of Value and the relationship between value and scarcity (see Figure 8). 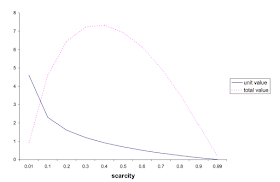 Equally, the cost of production of each unit of that activity tends to reduce with volume i.e. the cost of production of a commodity unit such as a standard phone is vastly less than the cost to research and create the first ever phone. As a result the transitional phase (the time of custom built and products) also tends towards the most profitable with the highest total value and declining production costs.

In practice, the area of highest profitability tends to extend further than anticipated because the economic value associated with an activity tends to exceed the differential value it brings us due to effects such as branding, confusion of choice, poor information and our inability to determine actual differential benefit.

For example, even today we tend to view systems such as financial ERP (Enterprise Resource Planning) as providing some form of differential benefit despite the commonplace use of ERP systems and wide spread copying of customization. Hence we often associate more economic value to ERP than we should.

Variation
Whilst the genesis of an activity is a time of experimentation and rapid change, as the activity starts to diffuse then more producers tend to become involved.  Hence the total volume of variation tends to increase during the transitional phase until such time as the activity becomes commonplace enough that defacto (and in some cases dejeure) standards appear.

Customer
During the genesis of an activity (i.e. the first SMS, the first car, the first phone), there is no wider market to speak of – the market is yet undefined. In most cases, listening to customers can be unhelpful and gut feel tends to rule the day. Genesis is hence always a gamble.

As the activity starts to diffuse, more producers become involved, the activity evolves and the market becomes more defined. Listening to customers becomes essential for refinement and improvement over competitors.

In the later stages of evolution, the customers often have inertia to change (more on this subject later) due to existing norms of operating. Hence listening to customers can also become counterproductive and what becomes important is a detailed analysis of where a defined market is heading.

For example, the provision of computing infrastructure as a utility service by Amazon was often dismissed in the early stages as not meeting enterprise customer needs. Utility provision simply represented an evolution of a pre-existing activity from products towards standard components and provided benefits including volume operations. However, this was often countered with inertia to change through concerns over ownership, changes to existing operating practices, trust, questionable needs for customization and other associated “risks”. Today, many of those same customers are now adapting to this world. The same resistance to change is a common factor throughout history for any shift towards more commodity and utility provision.

This change of characteristic from chaotic (rare, uncertain, deviation, source of differential) to more linear (common, well defined, standardized, cost of doing business) appears to be universal and is occurring to all the components within our organisations value chains.


Next post in series ... Why one size never fits all