Look before you leap.

The different types of situational awareness.

I’m a bit of a stuck record when it comes to supply chains, situational awareness and mapping. In order to get myself off the subject, I thought I’d have a bit of a rant about this bugbear of a topic. I’m going to do this with the aid of multi-domain defence.

Why do we need defence? Let us start with Government.

Government needs a society i.e. something to govern. This doesn’t mean society needs government, however that’s a conversation for another time. A society also needs citizens otherwise you’re governing the society of yourself.

Beyond a society to govern, it also needs legitimacy in governing. That legitimacy can take many forms but if some other Government can exert its percieved legitimacy more than yours then you won’t be governing — they will.

Legitimacy implies something to be sovereign over such as a physical territory. Sovereignty implies some sort of theatre to act within. For example, land or sea or air. To operate in that theatre assumes there is actually a landscape to operate within, that you have the capability to do so and some way of operating (an operating model). Finally, a theatre does imply that you are aware of the existence of the landscape. This will be our basic scene for discussing defence and I’ve drawn it up in a map. 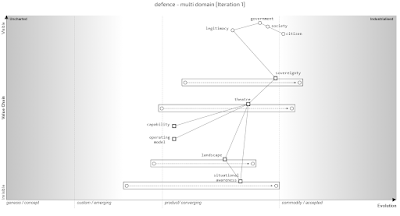 Societies have norms of behaviour — a combination of principles of operating (or heuristics) with the beliefs (or values) of that society. But having those norms is not enough, a society must be successful in spreading or at least maintaining its norms. Citizens also require a sense of belonging which in turn requires some element of trust and an appearance of success. A key thing to note, appearance of success is not the same as actual success i.e. it’s perfectly possible to convince a population that we’ve “won this war” when the opposite is happening. 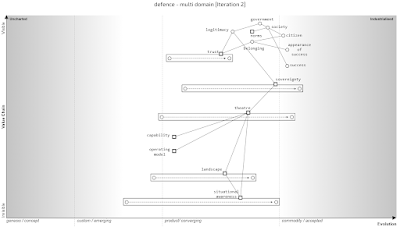 On the map we have several pipelines (those rectangular blocks). Whilst most of a map represents statements of logical AND such as this needs this AND that. A pipeline represents a non exclusive OR. For example, trust consists of many components which share a meaning of “trust”. This includes integrity (I trust you to do what you say), benevolence (I trust you to work for my benefit) and competence (I trust you have the skill). You can choose to be competent but lack benevolence or integrity, you can choose to have all these components or you can choose to be weak at all. The level of trust will depend upon how much of each you invoke.

Our understanding of what these components mean is also evolving. It should be noted that all components evolve, the arrow in the pipeline doesn’t mean one evolves to the other but that they are all evolving independently.

Naturally, the components of trust are connected to other components — competence is tied to success, norms of behaviour are tied to integrity, benevolence is a key part of belonging. Benevolence doesn’t mean it won’t cause you harm, abusive arrangements can be based upon a “greater” threat i.e. you sacrifice rights to be protected against a perceived “greater” threat. 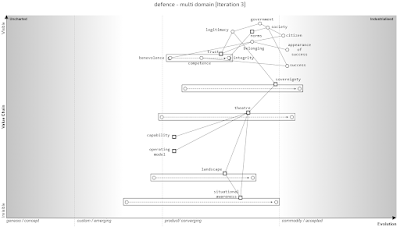 Moving down the map, we can now flesh out the concepts of sovereignty. Typically we think of this as territorial sovereignty (i.e. protecting our land) but there are many elements to sovereignty — protecting our culture, our political systems, our economy and even our technology (i.e. digital). For a Government to have legitimacy it requires control over the political system rather than being appointed by someone else (i.e. a puppet government of others). If it is a puppet then the others are exerting their legitimacy to determine how the political system works.

Success is often tied to protecting “our” land along with our economic and technological progress. Integrity and benevolence is often tied to our cultural systems and the stories we tell — the myths of great deeds or tales on the balance of conflict i.e. robbing the rich to help the poor (Robin Hood) versus robbing the poor to pay the rich (Sheriff of Nottingham). The “appearance” of success and integrity is also tied to our political systems. The society might be failing but we can still build belonging if our political system has the social capital to tell a few fibs.

One thing to note is that all maps are imperfect representations of a space. What I’m showing you are my assumptions and my biases on the subject. Hence, all maps are open to challenge and improvement. 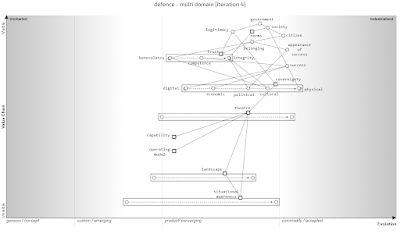 Let us take the theatre of art. Hollywood was historically used to spread Western culture through the medium of film. Today, the most significant theatre of art is immersive video games hence organisations like Hezbollah produce video games. These might seem unusual theatres of competition but we shouldn’t limit ourselves to land and sea. Areas such as social media can be used to enhance or undermine (through radicalisation) our political systems. The economy itself is a theatre of war from sanctions to exclusions such as the recent use of SWIFT protocol. 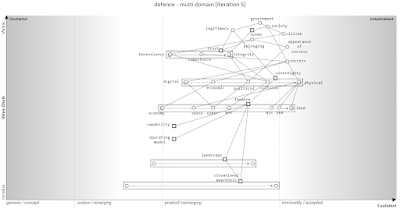 Another theatre is CNI. This covers many areas from food to water to energy to telecoms. I’m going to expand this one out because it is tied to the appearance of success. It’s hard to use political capital to convince people within the society which you govern that things are going well when they are starving or lack access to fresh water or heating for their homes. 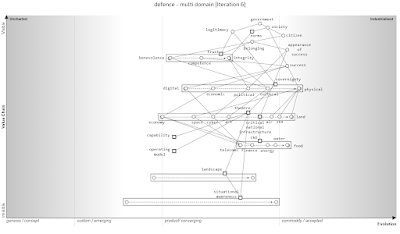 These theatres apply to landscapes. The one we are most familiar is concerned with physical sovereignty i.e. our land, our borders, our territory. Of course, territory itself varies a lot i.e. France is not UK which is not Germany. Understanding your landscape and the elements within it (situational awareness of the physical landscape) is critically important. If you don’t know where your resources are or where an attacker is or the type of land then you will be at a severe disadvantage. Sending tanks to defend against an invader might sound sensible but quickly degenerates into farce when you discover that the land you’ve sent the tanks to is a swamp, the invader has significantly more numbers and they’re not even at the swamp you’ve sent the tanks to.

Fortunately, we’ve learned these lessons over time and are are pretty good at physical awareness. We have built a host of systems to enable this from radar to accurate maps. 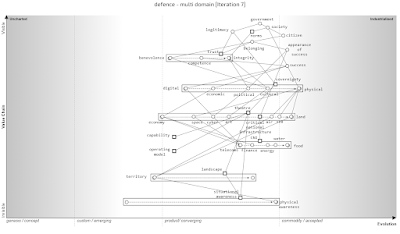 Supply chains themselves are more uniform than territory — there are only so many ways to build a bullet or to make a window. Unfortunately our awareness of those supply chains is in general … atrocious. The UK has been through a number of shocks from brexit to covid in which a better understanding of our supply chains would have helped. Today, we have conflict related to Ukraine and shocks such as climate change facing us. The problem with acting in theatres (such as the use of sanctions) is that if you don’t understand the supply chain landscape then … well, it’s a bit like dropping a bomb on a physical landscape without looking at where you are dropping the bomb. Targetted approaches do require you to look at the space. 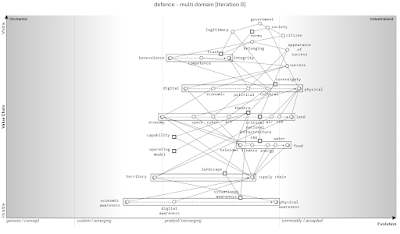 A note to the future

Across these theatres, our ability to defend ourselves and others (whether from shocks or conflict) and our ability to effectively co-operate and collaborate with others depends upon our awareness of these landscapes. Supply chain attacks across software, across physical goods, across CNI, across our political systems (in a future of AI generated video content when you can’t tell whether the person speaking to you is real or not), across our cultural systems (the use of radicalisation, the alteration of history) will become more common over time. Kinetic warfare (throwing deadly stuff at others) is expensive and opponents will look for asymmetric advantages.

For the last decade, I have repeatedly watched the executive functions of government and corporations ignore these issues and be outplayed by others. Let me be clear, our weakness is in our lack of situational awareness over our supply chains from digital to physical. These spaces are dominated by stories and graphs with rarely a map to be seen 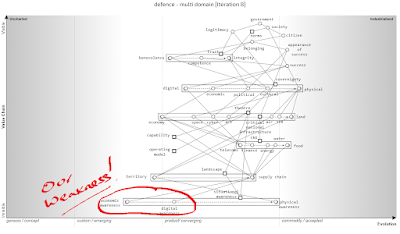 I’m hoping that in the future we embrace a concept of defence far beyond land, sea, air, space and cyber which is built upon the ideas of situational awareness of not just territory but the landscape of supply chains.

Feel free to take the map and modify it yourself. I’d like to see someone improve the map. As I said, it comes complete with my own biases, inertia and assumptions and should be challenged — https://github.com/swardley/Research2022/tree/main/defence/additions