In search of two better terms - Chaotic vs Linear

Many years ago (getting on for a decade now) when dealing with the issues of diffusion and how changes not only diffused but evolved, I developed the following graph to describe evolution (see figure 1). 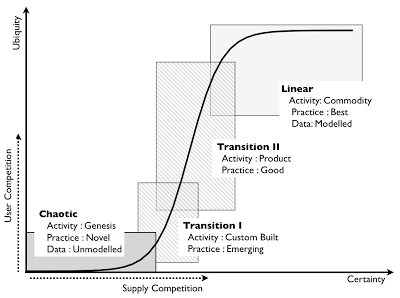 By measuring the change of the style of publications related to the act then different domains were highlighted i.e. for activities (things we do) we have :-
This process of evolution covers activities (what we do), practices (how we do things) and data. Each of these evolve through similar states in terms of characteristics, though the terms we use are different i.e. activities evolve from genesis to commodity, practices from novel to best.

To understand the connections we need to invoke mapping techniques but that's another conversation. What I'm looking at is one of the underpinning axis of mapping ... evolution.

By 2008, I had amassed several thousand data points providing the same pattern and the causation had been modelled (simple competition including user and supply). However, one thing has niggled me from the beginning. Back when I started to collect the data, I needed descriptive terms to describe the characteristics of the extremes of evolution with the in-between state being a transition from one to another.

At one extreme you had the un-modelled, the uncertain, the constantly changing, the unpredictable, lacking agreement and convergence, the novel and rare, the exciting (in terms of future potential) and the poorly understood.

At the other extreme, the same act would evolve to the understood, the stable, the predictable, the measured, the agreed and converged, the common and widespread, the dull, mastery of perceived simple operation.

The latter simple operation is important as the actual act through standard interfaces often hides a world of complexity in the same manner that putting a plug into a socket and switching it on hides the complexity of electrical generation and distribution from the consumer. We have a perceived notion of mastery - we socket the plug and switch on - and expect power to be delivered. We are often unaware of the myriad of systems - some simple, some complex - that enable this. Our notion of mastery is only shaken when our expected outcome is not delivered.

The same holds with currency. When I hand over a pound to buy my 20p newspaper I have an expected outcome. I don't expect to get a varying amount of change in return. When I turn on the taps, I expect to get running water not nothing, not sand, not sludge and not a fizzy drink. It's our expectation of a simple linear type operation which is essential in defining commodity and utility despite the actual complexity of any systems the interface obscures. 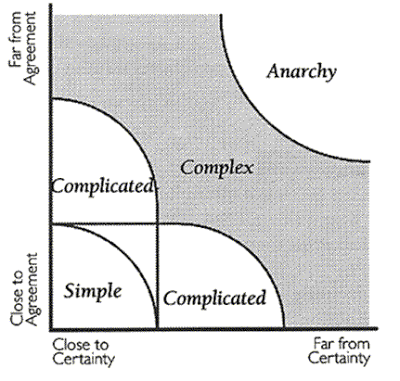 Simple in this term referred to a simple linear type operation and on reading a paper by Roger's which discussed how things not only diffused but as footnote mentioned how they matured becoming less chaotic and more linear in appearance, I decided to use the terms Chaotic vs Linear to describe the extremes. However, I've never been happy with those descriptive terms mainly because the notion linear degenerates quickly into linear / non-linear systems and the notion of chaotic quickly degenerates itself into other discussions.

So, finally, after all these years, I'm revisiting this and looking for two terms which more aptly describe the characteristics of the extremes i.e.

Something more apt than "chaotic" to describe characteristics of the un-modelled, the uncertain, the constantly changing, the unpredictable, lacking agreement and convergence, the novel and rare, the exciting (in terms of future potential) and the poorly understood.

Something more apt than "linear"to describe characteristics of the understood, the certain, the stable, the predictable, the measured, the agreed and converged, the common and widespread, the dull with  mastery of perceived simple operation.

A good friend of mine @jamesurquhart has suggested "wild" vs "domesticated". I actually quite like that as descriptive terms for the characteristics of the extreme (see figure 3). I'm hoping someone might have a better suggestion. 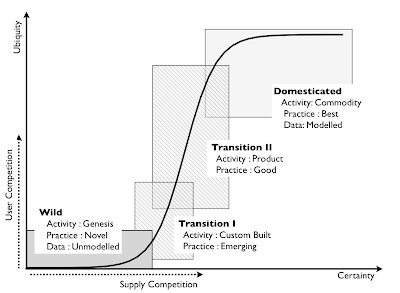 What I want to avoid is meaningless or confusing terms such as "innovation" which is equally used to describe genesis of something, feature differentiation of a product or more evolved models of providing pre-existing activities. I'm looking for something more apt in describing those characteristics which is not tarnished by common use or loaded with other connotations
Posted by swardley at 4:16 pm