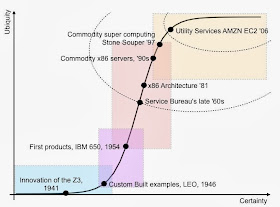 The problem with any transition is that inevitably you end up with extremists, cloud computing and IT are no exception. I thought I'd say a few words on the subject.

I'll start with highlighting some points regarding the curve which I use to describe the underlying transition (evolution) behind cloud. I'm not going to simplify the graph quite as much as I normally do but then I'll assume it's not the first time readers have seen this. 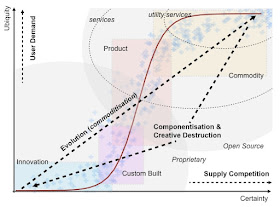 The points I'll highlight are :-

The above is a summary of some of the effects, however I'll use this to demonstrate the extremist views that appear in our IT field.

Private vs Public Cloud: in all other industries which have undergone this transition, a hybrid form (i.e. public + private) appeared and then the balance between the two extremes shifted towards more public provision as marketplaces developed. Whilst private provision didn't achieve (in general) the efficiencies of public provision, it can be used to mitigate transitional and outsourcing risks. Cloud computing is no exception, hybrid forms will appear purely for the reasons of balancing benefits vs risks and over time the balance between private and public will shift towards public provision as marketplaces form. Beware ideologists saying cloud will develop as just one or the other, history is not on their side

Open Source vs Proprietary : each technique has a domain in which it has certain advantages. Open source has a peculiarly powerful advantage in accelerating the evolution of an activity towards being a commodity, a domain where open source has natural strengths. The two approaches are not mutually exclusive i.e. both can be used. However, as activities become provided through utility services, the economics of the product world doesn't apply i.e. most of the wealthy service companies in the future will be primarily using open source and happily buying up open source and proprietary groups. This is diametrically opposed to the current product world where proprietary product groups buy up open source companies. Beware the open source vs proprietary viewpoint and the application of old product ideas to the future.

I could go on all night and pick on a mass of subjects including Agile vs Six Sigma, Networked vs Hiearchical, Push vs Pull, Dynamic vs Linear ... but I won't. I'll just say that in general where there exists two opposite extremes, the answer normally involves a bit of both.
swardley at 4:08 pm
Share
‹
›
Home
View web version